"The Ball by Egle the Queen"

From 22 March to 21 April there will be the exhibition of artworks by the Kaliningrad fashion artist Elena Kolomiichenko (1961–2004) in the Amber Museum.

Elena Kolomiichenko was a talented artist, whose destiny and creative work were closely connected with Kaliningrad, where she was born and left too early; where she went to school No 47 and studied in Kaliningrad Regional Musical College at the decoration department; where she lived after graduating from Leningrad Higher School of Industrial Arts named after V.I.Muchina; where she was wife and mother; where her position in art was formed, and her main works were created.

At the exhibition "The Ball by Egle the Queen" there is the same-name collection of costumes and amber jewellery, sketches made by the fashion artist, and abstract paintings.

The haute couture collection "The Ball by Egle the Queen" was first shown by its author in 1992 at the anniversary exhibition "236000" of works by graduates of the decoration department from Kaliningrad Regional Musical College in Kaliningrad Regional Art and History Museum. In the same time a video was filmed about this collection, which you can also watch today in the exposition.The feeling of lyric sadness, inarticulacy of some mystery were brought up by the exiting grace of the silhouettes sliding in space, and flashes of amber in the sunbeams. The collection was created based on the motives of the Baltic legend of Egle, the Queen of Snakes. The plot has no scene of the ball, however Elena had always loved fantasy of charming princes and princesses, kings and queens, and dreams of their fairytale life. In her interview she explained that the legend has a too sad end, that is why she decided not to tell it to the end, but chose the beautiful ball which could be held in the undersea castle of Egle the Queen of Snakes. Original white and black costumes of guests and the silver dress of Egle are hand crocheted, every element of the pattern was designed specially for every model. Black and white ornaments are well seen due to the contrast on human bodies, fancifully changing the known features, the linear pattern is perceived as a pattern on the skin. Interplay of organic shape and geometry of the pattern, silhouettes and its graphical filling, plastics of the moving figures and ornamental rhythms make the complete artistic image, where all the elements are exquisitely adjusted and firmly interrelated. An important part of the costumes are amber accessories. E.Kolomiichenko considered amber as an element accumulating the life energy, she called it "the sun battery" , and the use of it in a costume was not accidental. Picturesqueness of amber buttons, fixed adornments of the dresses, pendants on the hats is emphasised by achromatism of the costumes. Shining of amber cabochons in a fanciful and at the same time strict metal graphics of the crowns and bracelets make an impression of the fairytale magnificence. The jewellery pieces were made based on sketches and drawings of Elena Kolomiichenko by Kaliningrad amber master Iurii Reshetko (1943–2008) financially supported by the company "Lev". At the exhibition you can see 9 costume models and amber accessories for them preserved thanks to the Centre for Development of Interpersonal Communications, which owns the collection.

Elena Kolomiichenko was a couturiere, who foresaw fashion trends, nearly two years before trends emerged she used them in her fashion collections. She created haute couture collections "The Ball by Egle the Queen" (1992), "Leda's Daughter" (1997), "Kargopol" (2000), "The Summer in Berjoe" (2001), which felt like complete artworks, where the artistic image was revealed due to the synthesis of expressive means of various kinds of art: fine silhouettes, unexpected textures, and delicately selected colours of costumes; due to matching of diverse rhythm and plasticity of the moving figures, to the theme and content; of the accompanying music and light space design, which was the basis for the stage setting. Every collection show was a finished mini-theatre piece with its own art direction, and costumes in the lead roles.

In the exposition there are numerous sketches of different costumes that discover a little the creative process of the fashion artist, which resulted in an haute couture artwork.

Elena Kolomiichenko was an artist of the wide creative range, she made costume designs, sewed, crocheted, painted, drew, worked with enamels; elaborated her own technique of net embroidery.

For the first time paintings by E.Kolomiichenko made in the last years of her life are on display in the exhibition. The series was not finished and was not shown within the lifetime of the author. With the language of colour and dynamics of abstract forms strong emotions and tender delicate feelings are expressed in them, figurative associative compositions were created. The colour decisions are often unexpected, but always sharp and balanced. By analogy with the concept of perfect pitch it would be fair to mention that e.Kolomiichenko had the prefect sense of colour.

The small exhibition can not show the whole spectrum of author's work, but it reveals the bright image of the creative personality of the artist Elena Kolomiichenko. 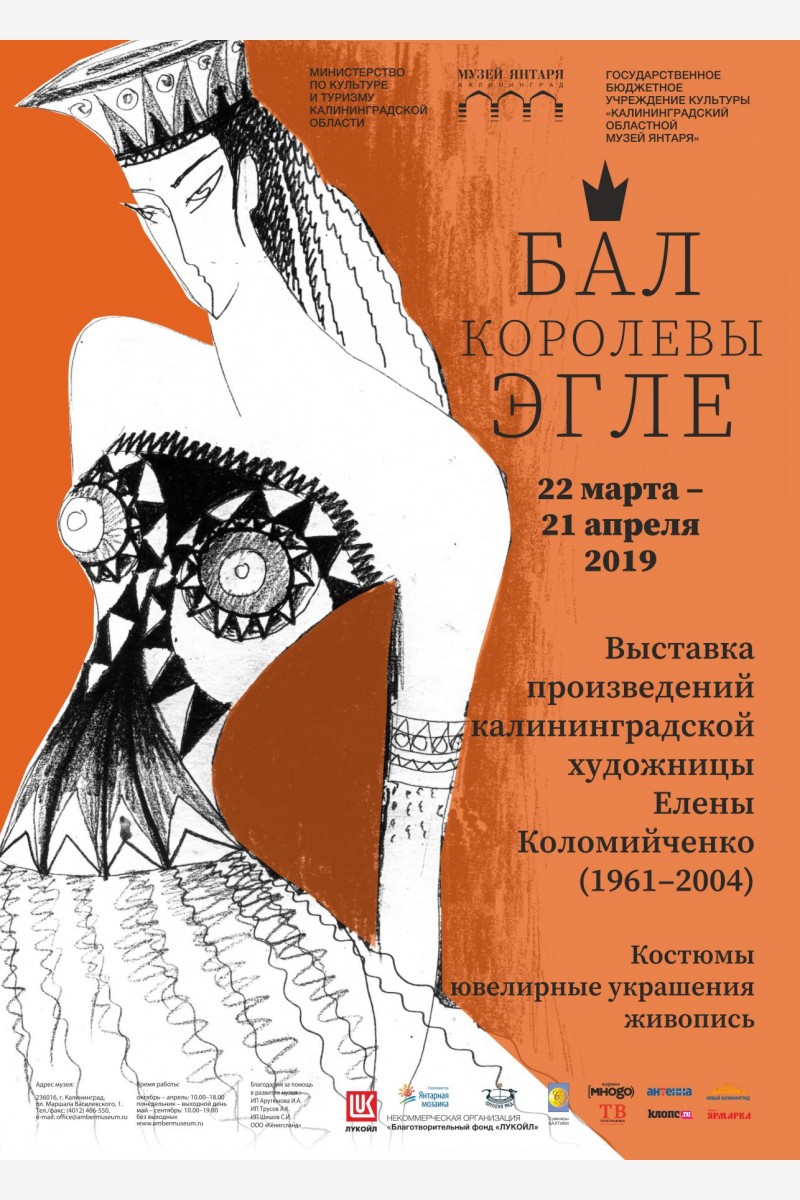