Exhibition cycle «Showpiece of the month»

The cycle consisting of 12 exhibitions of one showpiece is an opportunity to present to the audience unique art works made by Kaliningrad masters that have left walls of artistic workshops for the first time.

The casket is made of natural Baltic amber glued on the wooden base, mammoth tusk, and natural nacre. A set of semi-transparent amber plates in inlaid with a contrasting pattern of mammoth bone emphasising the honey hue of the sunstone, and the nacre inserts on the butterflies' wings produce an effect of slight overtones. Used techniques: base mounting from amber plates, mammoth tusk and nacre inlays in amber, sawing out, polishing, fitting.

Author of the casket Natalia Almazova was born in in Kaliningrad in 1972. She studied at the philological faculty of Kaliningrad State University. She started working in the jewellery workshop of the Rembyttechnika company in the early 1990s, where she mastered the profession of jeweller. She has been working with amber since 1996. She is a member of the informal artists' association "The Romantic Project", member of the Kaliningrad branch of the Creative Union of Russian Artists.

Natalia's  favourite themes are plots associatively related to Baltic local myths and legends. In her works, the combination of delicate and sculptural carving creates unexpected impression giving a viewer an opportunity to see the twofold nature of the Baltic gem, its almost feather-like lightness and intensive apparent density. Sometimes, she uses sculptures from the antique and Renaissance epochs as samples for her artworks, however these items never come to simple copying, but always become livle and rather independent authorial interpretations. The artists often makes up small novels, in which she tries not so much to explain, but rather to complete the visual image with an original literary association.

Awards:
2019 – Laureate in the category "Mastery"at the exhibition and contest "BOTANICA" that took place within the International Biennial of Amber Artworks "Alatyr 2019"; special diploma of the juror B. Göres (Germany), Kaliningrad Regional Amber Museum.

Works by the artist are in collections of the Museum of the World Ocean, Kaliningrad, Kaliningrad Regional Amber Museum.

A curious fact about the history of creation of the artwork

I have never liked to boil this miracle of the post-Зoviet food industry...

Water in the frying pan was resisting the heat as if it competed in insistance with the old electric oven. And grey round of dumplings (Russian raviolli, pelmeni) in a box have already erupted in perspiration promising to fuse in inseparable kisses.

My love, said the voice with obvious notes of guilt from the balcony, I haven't noticed the cat. He has overthrown what was left from the cherry compot (fruit drink) on the table…

I should have become upset, but sparring between the oven and the pan was close to its culmination, and my brain didn't give anything but "I am busy Portos, clean on your own! Clean on your own...!!!"

Mutter, fiddling, the sound of water in the bathroom, then quite.

Darling, quitly came from the crime scene, you should see it,

Behind the open window of the balcony spring was playing with bright colours of the blue sky.

The criminal, sitting on the chair, was looking at the table as if bewitched, where in the dark red sweet lake were floatin boatrs – cabochons for the casket, and also they were there.

They were enjoying the nectar of the last fall. They, who survived the winter, now demonstrated the whole beauty of the natural perfection.

On the shores of the sweet-scented lake were sitting seven butterflies.

"Here is the theme for you", – was said quitely behind my back. 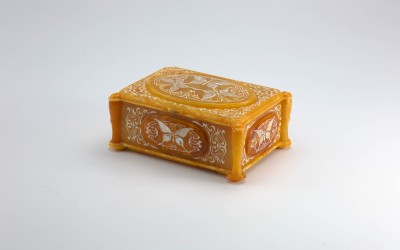 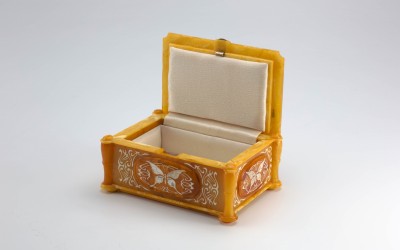