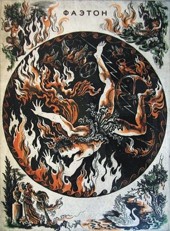 Phaethon was the son of the God of Sun Helios. His mother was also of divine origin, although not as high as her husband – she was the daughter of the Sea Goddess Thetis. Apparently, Phaethon was an extremely proud young man, and pride, as is known, will have a fall.

Once a relative of his, having decided to play a joke, said that Phaethon’s father was not at all the God of Sun but a mere mortal. He should have known, what a huge impact the silly joke would have on the humankind! The shocked Phaethon rushed to his mother and demanded explanations from her, and Clymene sent him straight to the God of Sun so that the latter himself could dispel all the doubts. Helios, willing to console the upset boy, swore to fulfill any of his wishes to prove their natural cognation. And Phaethon, taking an advantage of it, immediately demanded his father to let him go for a ride in his golden chariot, in which the God of Sun daily – from dawn till sunset – makes his journey in the sky warming and lighting up the earth.

In spite of Helios’s trying to persuade him to give up the reckless wish, Phaethon insisted. And the God of Sun, unfortunately, could not break the oath that he had been too hasty to take. And since the chariot only had a single seat in it, he had to entrust his son with the reins of government. Helios, of course, tried to give him a lot of useful advice and instructions, but Phaethon turned a deaf ear to his father’s words. He was so happy that his dream had finally come true.

Unfortunately, the poor boy did not know what it all would result in. He was not strong and skilled enough to manage the winged horses; they rushed leaving the road – at one moment soaring up high to the stars, at another sweeping along the earth as a fire whirlwind. Forests and towns on the earth caught fire; the sky was covered with black smoke. All living things were threatened terrible destruction.

And then the Goddess of Earth Gaea screamed out loud:
– Oh, mighty Zeus! Save me!
Hearing Gaea’s supplication, Zeus the Thunderer threw a lightning to Phaethon’s chariot and broke it to pieces. The horses scattered, and Phaethon enveloped in flames shot in the sky and fell on the bank of the Eridanus River.

His mother Clymene and sisters Heliades having found the boy’s body cried over him for so long and so bitterly, that gods feeling sorry for them, turned them into poplars. But even then the Sun’s daughters’ grief did not abate. Forever bending over Eridanus, they are dropping resin tears in the cold waters of the
river. The drops harden in the water and turn into amber.