Legends and myths of amber 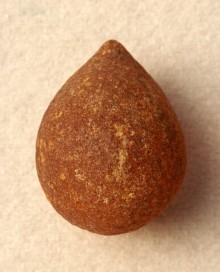 Since people learned to use amber, which happened at least 5–6 thousand years ago, attempts have been made many times to unravel the mystery of its origin.

Both scientific works and folklore have come up with versions that have not yielded to each other in the degree of their irreality.

At present no one doubts that amber is a mineral of organic origin belonging to the category of typical resins. However, it took quite a long time for scientists to reach a consensus on this matter.​.

Some researchers were, for example, convinced that amber was hardened oil, others tended to consider amber as fossilized honey of wild bees. Hypotheses were also put forward that amber was sea-foam that had hardened under the influence of sun beams; amber was considered to be a product of vital functions of forest ants, solidified “sun ether”, mountain oil, earth mineral fertilizer and so on.

It is not surprising that there were a lot of hypotheses. Amber is not only completely different from other semi-precious stones, but it itself featured such a great variety of forms, textures, structures, sizes, it demonstrated such a wealth of colours, it possessed such unusual chemical and physical qualities that in the past the mineral quite often nonplussed researchers. Indeed,
what is it: it burns in fire like coal crackling and smoking; it melts when heated without access of air; it produces static electricity if rubbed; some kinds of amber float in salty water. The stone is warm to the touch. Besides, one can see different insects inside some amber pieces. How did they get there? Since amber is often found on the sea shore, but butterflies and flies, as is known, have never lived in the sea…

While scientists were busy looking for the truth carefully gathering evidence, people were fast to explain everything by miraculous and supernatural forces.

It always happens this way: where mind and logic are powerless, scope for creativity appears, imagination starts working. The organ responsible for imagination is especially well developed in children and in young peoples.

That is why all the legends about amber emerged at the dawn of civilization.

First of all, ancient peoples endowed amber itself with supernatural qualities. Some primitive tribes used articles from amber in their magic rites. Amber amulets were worn as protection from diseases and against being killed in a battle. People believed that amber “pulled out” a disease from the body and “attracted” good luck – in the same way as it attracts small objects if you slightly rub it. It was believed that amber adornments averted misfortune, guarded from the evil eye, brought luck in love, and made a man stronger and cleverer…

Amber qualities are, of course, grossly exaggerated here, but something is accepted by modern science.

Amber undoubtedly has a positive impact on the nervous system, its “sunny” colour is pleasant to see, and touching its warm smooth surface is not only enjoyable but it helps one to concentrate, enhances one’s self-reliance.

Besides, they say that constant wearing amber adornments betters the condition of those having problems with the thyroid gland; amber relieves pain in case of joints inflammation, calcification.

As regards legends about amber, if one considers them carefully, some grains of truth can occasionally be found in them among numerous fabulous circumstances and details. 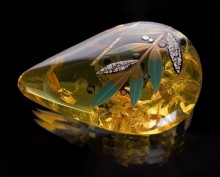 For example, an ancient Greek myth of Phaethon (that reached us in the interpretation of the Roman poet Publius Ovidius Naso born in 43 BC) definitely indicates the vegetable origin of amber – long before scientists came to the same conclusion.

The subject of tears is present in almost all the legends about amber. Occasionally they tell about tragedies of cosmic scale. The idea of dramatic events connected with the birth of amber was obviously suggested by the teardrop shape of some pieces of the natural stone.

Thus, in Sophocles’ (5th century BC) tragedy amber is the tears over the dead hero Meleager who was a victim of the mother’s imprecation.

In the Lithuanian legend of Jurate and Kastitis it is the Sea Goddess who sheds tears of amber mourning over her beloved.

In all the legends amber is a piece of news from the past containing a certain hidden meaning. Many people try to read the “message” – and every nation does it in its own way.

In Russ amber was called “alatyr” or “latyrstone”. “White and combustible is the alatyr stone”, lying “in the sea Ocean, on the Buyan island”, as the folk songs, fairy tales and old charms run. And the “combustibility” of amber, i.e. its ability to burn, is emphasized as one of its characteristic features.

The Russian people also have a fairy tale-parable about the singing stone that can only be heard by a man with a clear heart.

And the Baltic legend of the Gauya Bird links the origin of amber with a crime to which a cruel king of a foreign country incited his loyal servant.

The poetic perception of facts and phenomena of life, the mythologization of reality that was characteristic of ancient peoples preceded the scientific cognition of the world.

In the transformed and mythologized form legends have retained and carried through centuries the information about actual events, have brought us the ancient knowledge that sometimes surpassed and anticipated the further directions of the scientific search.