The free gathering of amber had continued till the XIII century, when the Teutonic Order promulgated the amber to be its own monopoly. The one, who dared to break this law was subjected to cruel punishment by the decision of special «amber court». Beginning from the XVI century in addition to the collecting amber on the beaches, the new method of obtaining amber – catching was widely spread. The hunters, equipped with the big nets on six-eight meter sticks, were coming into the water or going to sea by boats; and catching the seaweed with the amber, stuck in it.

A little bit later, the people started to obtain the amber directly from the bottom of the sea with the help of different instruments: gaffs, pincers and scrapers. It was usually done from the boat and in a calm weather.

The first mentions of the surface amber extraction are referred to the middle of XVI century. The people dug the pits at the shore, and, if there were the grains of amber in the ground, the bottom was delved further – till the subsoil waters. The amber pieces were emerging on the surface. In the middle of XVII century there were the attempts to excavate amber from the shore’s steeps. 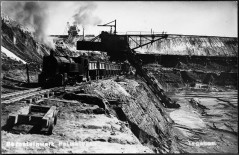 In 1781 near the present-day village of Sinyavino the first amber mine of about 30 meters deep, was founded. It was meant for industrial extraction of amber. However, few years later it was closed as unprofitable. In the first half of XIX century the amber extraction on open mines proved to be more efficient. The small open-pits (30 х 30 meters) were founded on some areas of the coast, which were rich in amber. Stratums of barren rock were removed and the emerged layer of «blue earth» was exploited.

By the beginning of XX century the deep amber mining had become unprofitable; and in 1912 the big open-pit was founded in the district of the village Palmniken (now – the village of Yantarnij) away from the sea. This amber pit had been exploited for about 60 years, and was exhausted at the beginning of 70s.

Before the Second World War at this deposit there had been about 400 tons of amber-adobe extracted annually. The amber was treated at Königsberg Amber Manufacture and other companies of Eastern Prussia. At the end of 30s, 2,5 thousands workers and craftsmen were working at the amber manufactures, and the same quantity of people was employed in winter season for additional works, mainly women. In 1945 during the attack of Soviet Army the big battles were taking place in about seven kilometres from Palmniken, that is why the amber manufacture almost was not damaged, though the amber pit was flooded and put out of operation. People, who moved to this territory after the war, remembered, that at the beginning nobody paid attention to the amber, considering it to be something like colophony, and even used it for kindling the fire in the stove. After the retreat of Germans at the store-houses of Palmniken there were several dozens tones of excellent amber left. These amber stores were used in the small workshops, which were organised in the village. The demobilised soldiers and some German citizens, who remained in the village, were working there. In 1947 the Amber Factory was founded. 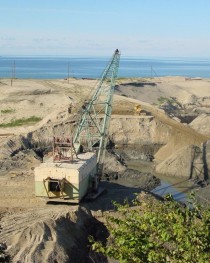 The most productive stratum, which has rich deposits of amber, is «blue earth». It has received such a name due to the considerable content of glauconite mineral, which imparts the bluish grey tint to it. The stratum of «blue earth» with the thickness from 2 to 12 meters, lays on the depth of 40 – 60 meters from the surface. 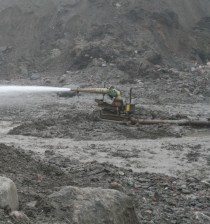 Nowadays the amber extraction is carried on in the open-cast mine, being a composite, highly-mechanized production. Originally the over-burden layers were exploited by excavator, and were transported in the slag-heap by rails. The principle of hydro-mechanization was introduced into practice after two huge landslides in 1957 and 1958, when the bottom of the mine was buried by almost half a million tons of the earth, the equipment and the whole transport system was out of order. To get to the amber stratum it’s necessary to remove the upper layers of barren rock. The thickness of the over-burden rocks at Primorsky deposit, which is currently in operation, is 56 meters. Hydro-monitors are washing them away by the streams of water, and the liquid pulp (the mixture of rock and water), which was formed, is thrown down to the sea by the pipeline. Before 1995 the «blue earth», containing amber, had been extracted by the chain-bucket excavator, and then transported to the concentrating mill by belt conveyer. Nowadays, in order to preserve the amber in a good state, the method of hydro-mechanization has been used; and the amber has been transported by pipeline.

The «blue earth», which was washed away by the water, is going to the Factory through the grate with the meshes 5 cm in diameter; where the workers are picking out the biggest pieces of the mineral. Then the most part of the barren rock, having gone through the sieve with the 2mm meshes, is going to the waste. The material, which has remained, is passed through the system of arc sieves, where it goes through its initial washing and dehydrating. Then in the separator this mass is exfoliated in the special solution of the density lower than amber; the heavy fractions are accumulating at the bottom, and the small amber with the pieces of wood are emerging at the surface. And after it the amber is washed again and dried in the heaters. The amber, separated from admixtures, is delivered to the sifter – the system of moving in opposite directions sieves, with the meshes of different diameters, which are located one above the other. By means of vibration the amber is sifted and divided into three fractions, depending on the size.